Canadian Timberframes Journey Part 2: How to Find the Best Time to Begin Construction on a Timber Frame

Construction runs smoothly thanks to a little forethought and attention to detail during the design phase.

Ask any timber home company or contractor and they’ll tell you that when it comes to starting construction on your home, it’s all about timing. But when you’re building a custom home in the severe climate swings of Ontario, Canada, that timing is particularly crucial.

“The site for this house was easy — open, clear and flat,” says Jeff Bowes, owner of Canadian Timberframes. “The big crunch was getting everything closed in before the snow started to fall. To get it done, we went with a standard spring excavation knowing we’d be delivering our supplies 6 to 8 weeks after the builder started.”

Tim Lamb of Lake of Bays Custom Homes got to work prepping the site, digging the foundation and adding the footings and concrete before Jeff and his team could deliver the air-dried timbers for the frame. Again, the topic of timing proved important to the process.

“Because we had worked the scheduling out in advance, we had the option to pre-cut the timbers for the project and let them dry naturally over the winter and into the spring,” says Jeff, explaining that by letting them sit for another couple of months, the timbers dry to almost kiln-dried status. “As I always say, Mother Nature took 150 years to grow the trees; couldn’t we give her at least one season to dry them out?”

Once the frame was delivered and raised, Tim and his team got started assembling the rest of the home’s pre-planned shell, provided almost exclusively by Canadian Timberframes. “We personalize each enclosure system we create by making exterior finishing choices long before construction begins,” Jeff explains. “From choosing a color palette to looking at digital output options of timber stains and tongue-and-groove treatments — all of the choices are presented far in advance, months before the homeowner has to make any final decisions.”

See also Matter of Time: Planning a Traditional Timber Frame Home
That benefit of time gave the homeowners the opportunity to go through different exterior finishes, such as stonework, shingles and siding, before handling physical samples and reviewing a live rendering with Jeff and his design team. “Seeing the whole house gives you a real sense of how it’s going to look and feel,” says Stephanie Bowes, Jeff’s wife and executive director at Canadian Timberframes. “If you can show an accurate representation of the house ahead of time, you’re less likely to face surprises and changes down the road. That’s exactly how it worked out for this build.”

These renderings also dictated how the finished wall system would be prepared before construction. For example, plywood was incorporated on the wall panels around the front door to eventually accommodate exterior stone work. Other wall-system customizations included horizontal and vertical strapping to anchor the siding, and cuts and grooves to perfectly hold the exterior timbers.

“We make these panels in our factory ahead of time, so the designer that planned the home also designs the walls,” explains Jeff. “Thinking ahead and planning for specific finishes and design details adds value to the builder and speeds up the process.”

One thing the walls don’t include are standard structural insulated panel (SIP) construction. Instead, they’re made from a full layer of foam insulation before custom insulation is blown in to match the climate’s needs, adding to the system’s flexibility and customization. Because there’s no solid interior layer, the walls also come with a built-in wall cavity for plumbing and wiring to run easily.

By creating a smart schedule and nailing down details during the initial design process, the build team ran into minimal hiccups during the construction phase, with the exception of one late-breaking request from the homeowner.


“He wanted to include a golf simulator in the lower level, so we had to change the engineering to lower the slab enough for him to get a full swing in,” says Jeff with a laugh. “I’d say that’s an okay challenge to have!”
Timber frame details:
Square Footage: 6900
Bedrooms: 8
Bathrooms: 6 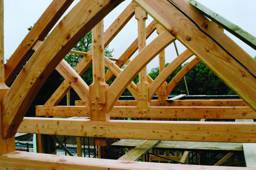